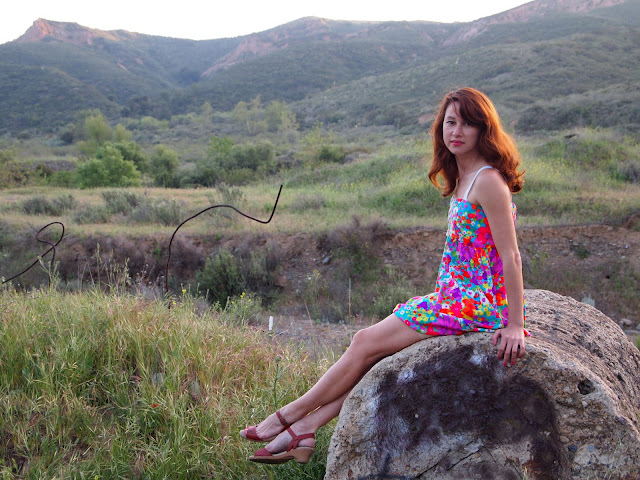 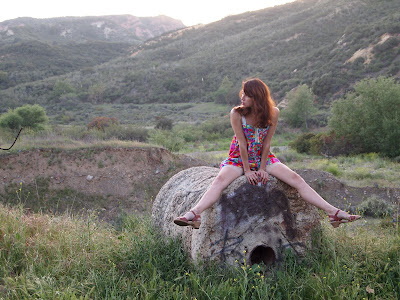 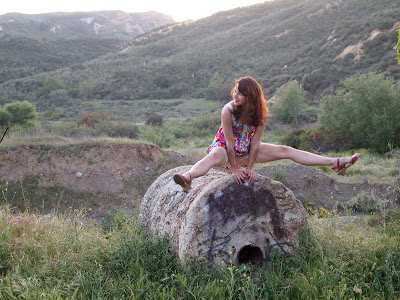 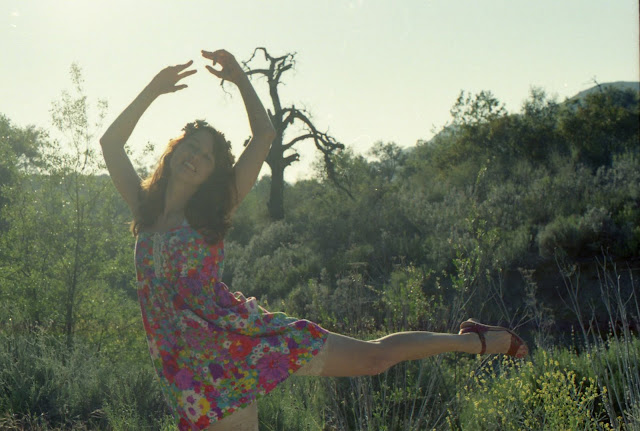 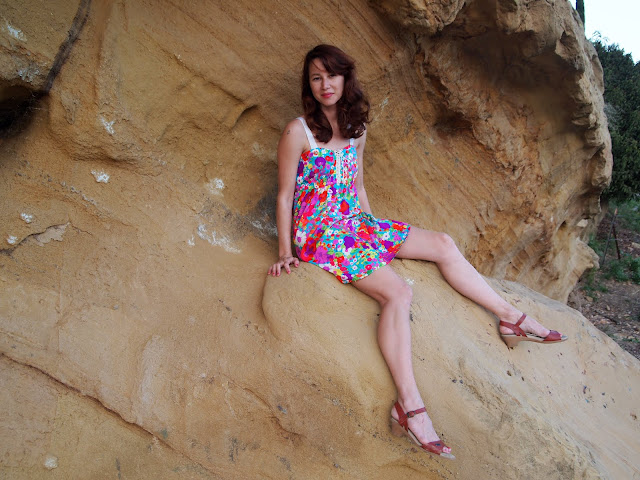 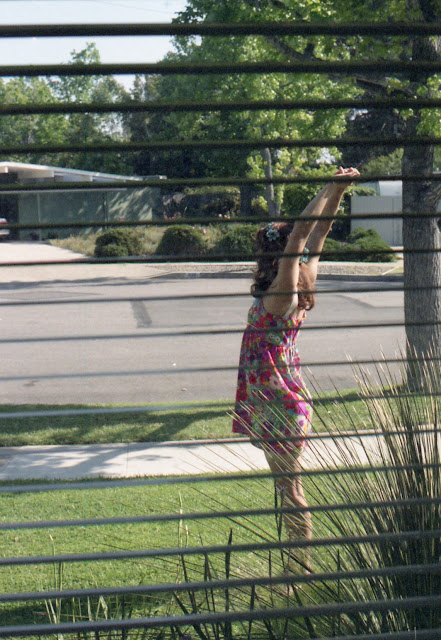 I'm so happy to be headed out to the Pacific Northwest today for a week long vacation. Pete & I are going to hit up all the Twin Peak hot spots, including the Snoqualmie Falls, and of course, we're going to devour some of that famed cherry pie that Agent Dale Cooper was always gushing over. We're also going to stay in a tree house in Washington! I've only been to the Pacific Northwest once, and it was nearly 10 years ago. I'd love to hear any recommendations that you may have. We'll be flying into Portland, Oregon, and staying a few days, and then headed towards Seattle, Washington, with some stops along the way. talk to you soon.

when the angels are curling your hair and the devil is scratching your heel. 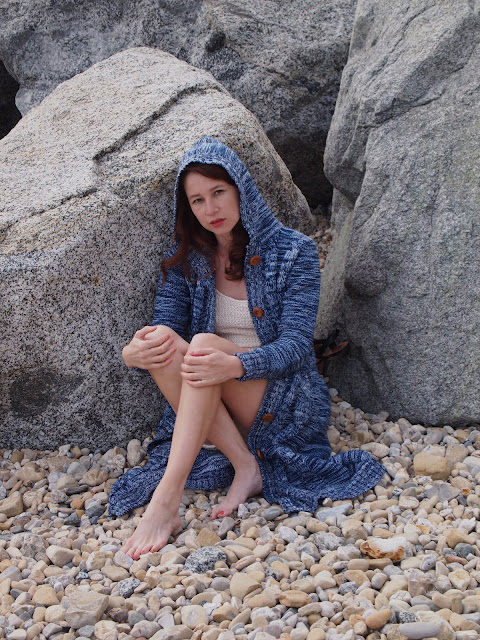 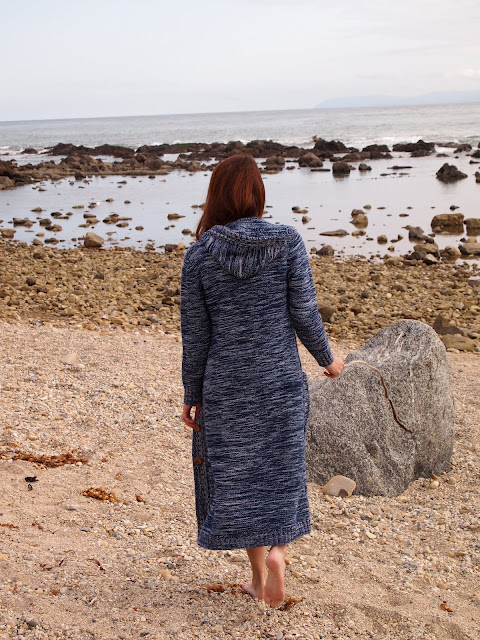 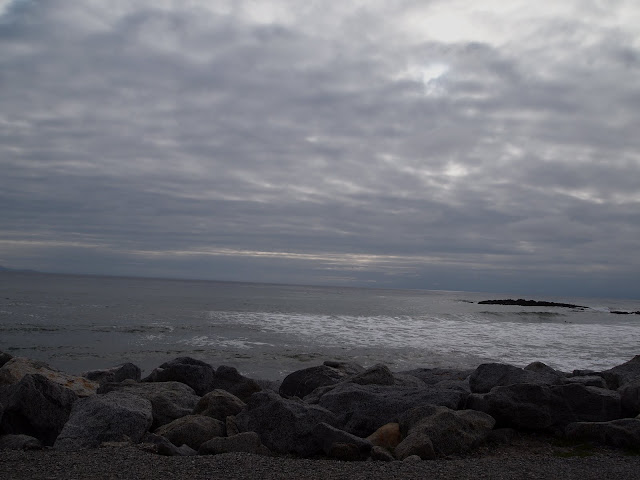 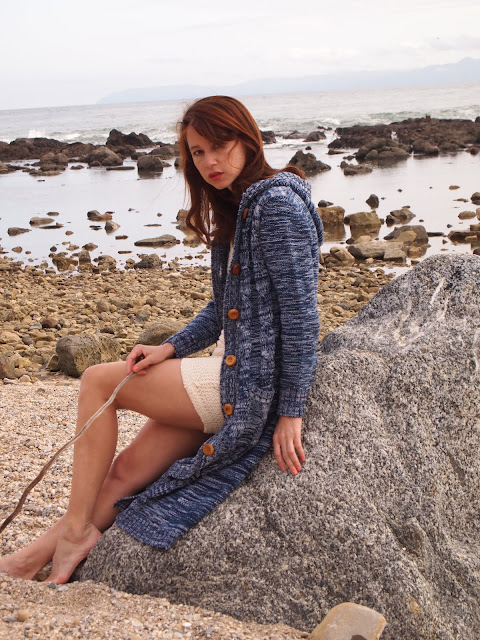 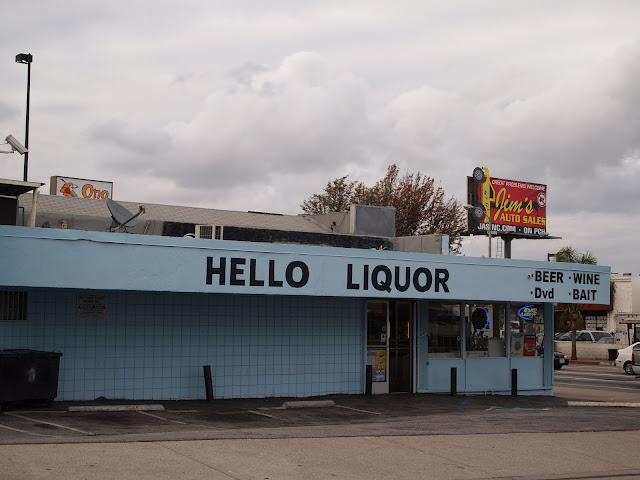 Vintage 70s space dyed sweaters always sell, and I don’t usually keep any for myself because I generally do not have a very “boho” style, but I’m afraid I might be keeping this long blue hooded one, even though I had every intention of selling it when Stacy took these photos. I’ve been wearing it with everything including a 1930s white eyelet dress, and then with cut off jean shorts with over the knee knit socks. These photos were taken in my favorite little neighboring town, San Pedro, on an overcast day when the sun shyly peaked through to say hello.

The Woody Guthrie convention at the University Southern California and ensuing celebration concert at Club Nokia was a rewarding and exhilarating experience. I learned so much about my hero and his time spent in Los Angeles. My only wish was that there would have been more folks at the convention and more minorities at the concert. I felt pretty embarrassed to be surrounded by only white faces, especially when Woody Guthrie was a social activist for all Americans, which he demonstrated in his songs and his actions, and he’s so relevant today what with all the home foreclosures, and homeless folks, and people out of work, and heartless immigration policies. The highlight of the day was when Ramblin” Jack Elliott, a buddy to Woody Guthrie, performed. He covered Woody Guthrie’s “Pretty Boy Floyd” with so much heart, drawling out the lyrics, that I couldn’t help but tear up. Jackson Brown impressed me too with his song “You know the Night” based on a long love letter that Woody Guthrie had written his second wife, Marjorie. More than ever, I want to write songs like these.

I took photos of this weekend’s outfits, and they turned out mighty cute too I might add, but my SD card got corrupted somehow, so I won’t be able to show em’ to you. I took a few film photos from this weekend that I will show you once they’re processed. I’m definitely gonna recreate my outfits soon because I hate for a good outfit to go to waste. Hope you’re well.
Posted by Crystal Lee at Wednesday, April 18, 2012 6 comments: 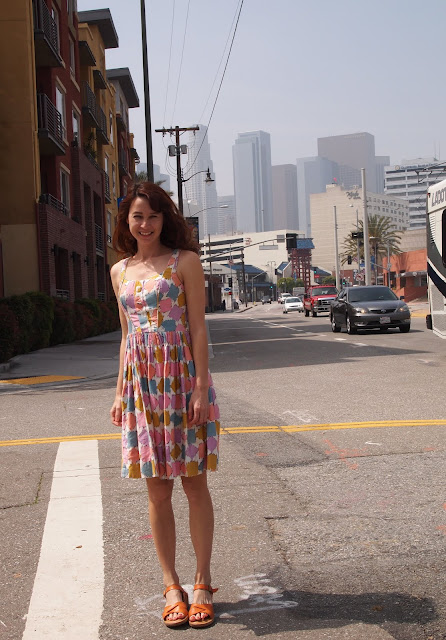 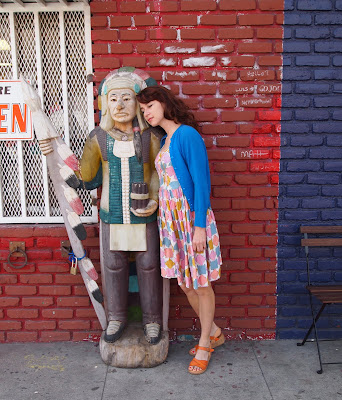 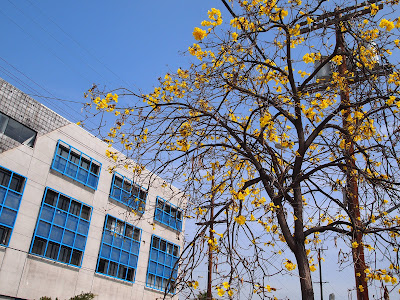 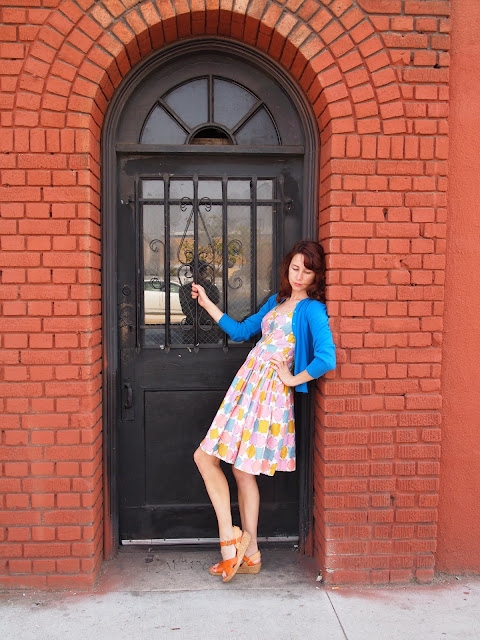 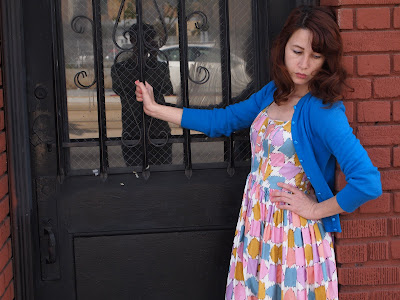 This is one of my favorite dresses, mostly so because it enhances my inward feeling of perpetual youth. Even though I’ve faced my share of hardships and responsibilities, I still feel like a teenager in many ways. I sometimes forget that I am an adult. Maybe one day ( when I’m like 70 years old), I will dress a bit more sophisticated, but for now I just want to have fun.

Even though I’m a youngster at heart, I like some pretty old fashioned stuff. For instance, this Saturday, I’m going to be celebrating Woody Guthrie all day with a conference and then a “This Land is Your Land” concert afterward. Woody Guthrie would have been 100 years old had he been alive today, and celebrations of his life and legacy are going on all across the United States.

I’ll be selling at the Long Beach Flea Market this Sunday too, if any of ya’ll would like to stop by and say hello. I’ll be in Space D 558.

Have a great weekend everybody!

Outfit: 50s pastel dress (Flashback Vintage in Orange, like 10+ years ago), vintage turquoise sweater (formerly belonged to a friend, but I've had it so long I'm obliged to consider it mine, probably thrifted), Kork Ease sandals.
Posted by Crystal Lee at Friday, April 13, 2012 4 comments:

Easter in trees, on the beach, in turquoise shorts 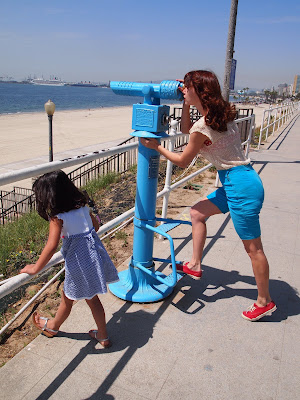 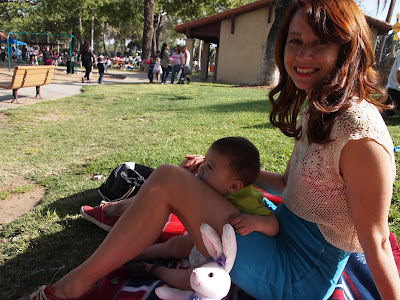 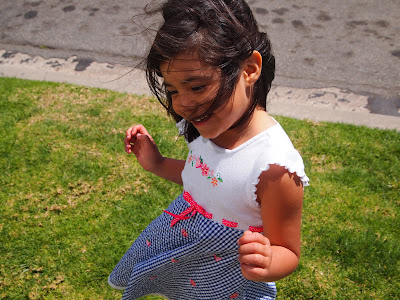 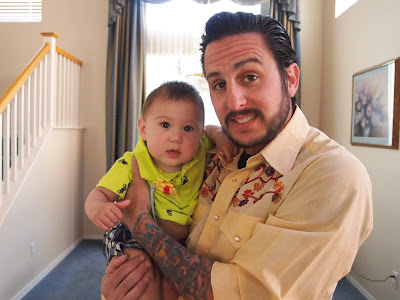 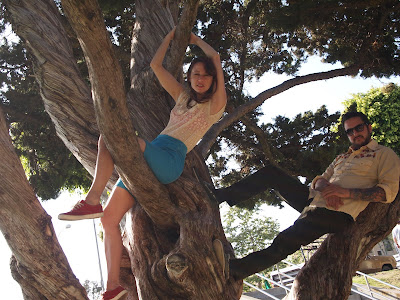 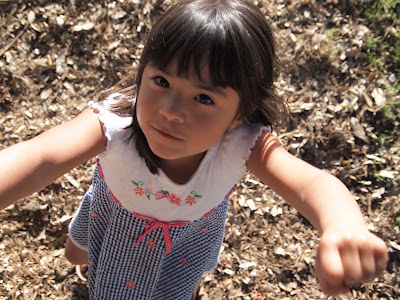 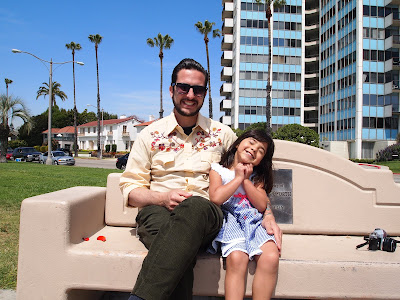 Howdy folks. Hope ya’ll had a nice Easter. I spent Easter outdoors with my family, which beats going to church any day. Hanging out in trees is how I worship. Baby Nicholas, my nephew, is now 7 months old. He’s crawling around and pretty well behaved, except for when he cried for one hour straight when we were about to eat at our favorite Chinese restaurant. He hasn’t seen my family for a couple of months, so I think he was anxious. After he napped, we all walked to the park and had ourselves a real nice time.

Usually I would wear a dress on Easter, but I’ve been really into turquoise lately, and these 50s shorts just sing Spring. 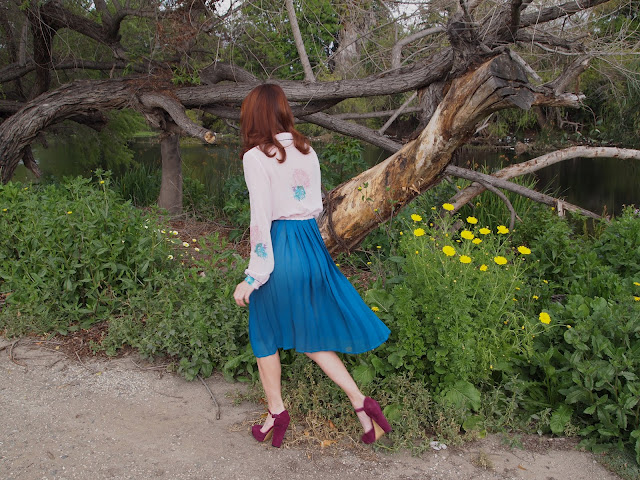 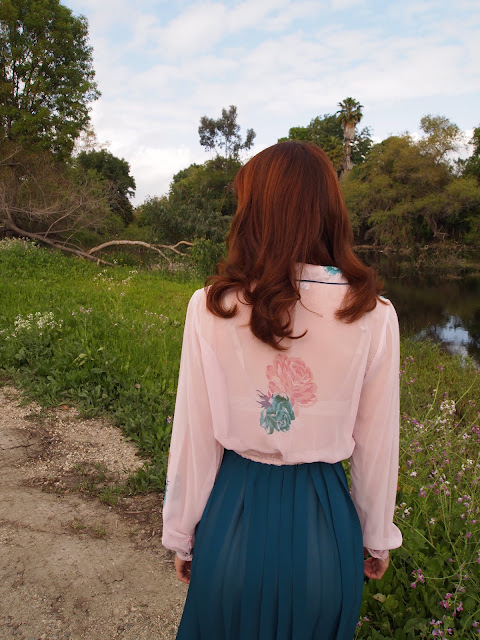 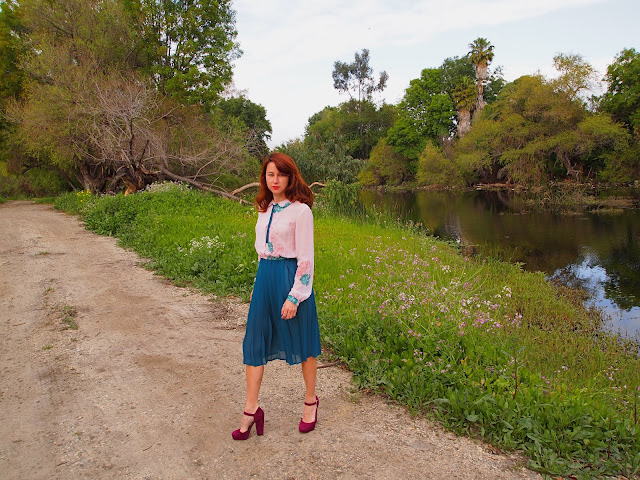 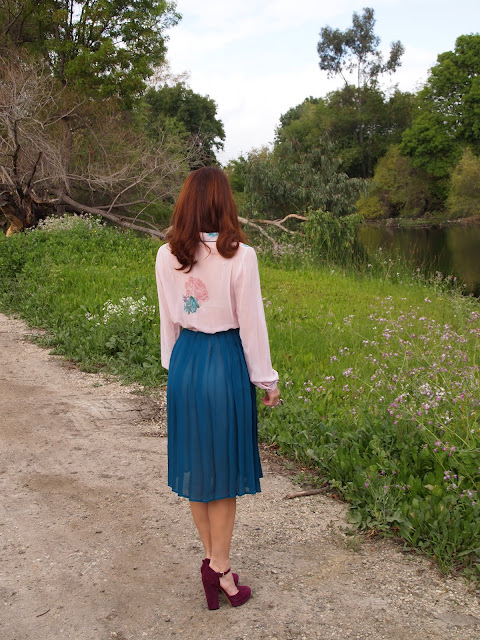 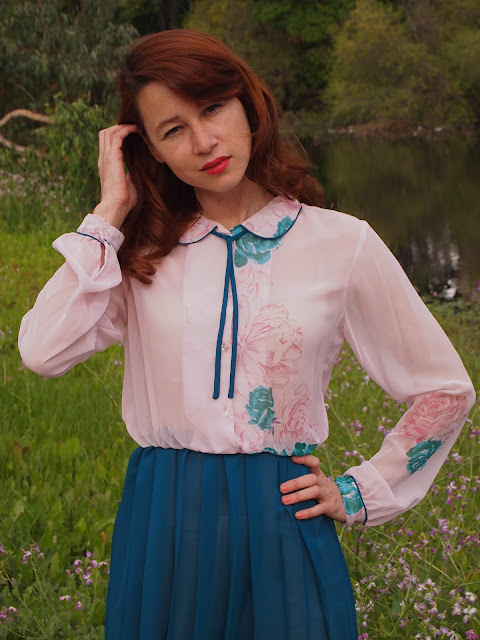 This beautiful sheer floral jewel toned dress will be in the shop sometime soon. I have a bunch of new pieces to add to nakedcowgirlvintage, but not a lot of time to put them online.

Transitional Housing for my family is my life these days, but it hasn’t been so bad. I’m happy to be in the position to help. As you may recall from a recent post, my brother was staying with me for about a week prior to entering rehab, and now my dad is staying with me until his mission trip to Indonesia comes into fruition (hopefully sooner than later. I won’t be able to house him indefinitely). Here are some mental scans of life with my dad this week:

In the morning before work: my dad’s round head covered in fuzzy wisps of hair, peaking through the blankets like the head of some cartoon caterpillar, his teeth in a plastic orange cup on our formica coffee table next to his beside. Like the stars, his teeth come out at night. His joke, not mine.

Evenings: We eat dinner together, and my dad tells us of his day’s ramblings, along with his full repertoire of jokes in his slow southern cadence, jokes that we’ve heard a million times before. Sometimes I laugh; Other times, I cringe. Pete generally seems to be amused. My dad also sings old folk songs, and I’m always amazed at how old timey he seems in today’s world of rapidly advancing technology, pop music, mega churches. He’s saving people in the streets of my town, and one lady started praying in tongues when he touched his finger to her forehead. He’s simultaneously walking off tummy mountain, built on a few years of southern fried food.

Bedtime: Pete and I have been watching Netflix instant in bed (Portlandia - so funny!, and old timey music documentaries that make my feet restless), while my dad watches every version of “The Passion” on the Trinity Broadcast Network (TBN), though last night he fell asleep to Ladies Ultimate Fighting. A funny anecdote: When I do the dishes at night, I like to listen to music, but my dad still likes to watch television with the volume down low. Last night, 60s girl groups served as the soundtrack for Jesus’ Crucifixion story.

I’m excited for the weekend. It’s supposed to be 81 degrees, and I’m going to play all day in the sun, and hopefully take some film photos! I miss my film camera so. Happy spring time, friends.
Posted by Crystal Lee at Friday, April 06, 2012 11 comments: